Nobody thought this would become an ethical issue, right?

The image you see on the left is next to impossible to achieve in normal circumstances. The square in front of the Duomo in Milan is always crowded, bustling with people. But this emptiness is real right now. After the official lockdown of Italy started, in spurts, on February 21 – first schools and cultural institutions, then stores and churches, and finally most workplaces closed – we are currently at a point that everyone needs a self-produced affidavit stating the urgent reason forcing them to be in the street. END_OF_DOCUMENT_TOKEN_TO_BE_REPLACED

An exhibition that has been in the works for several months is opening on March 1 at the Fort Worth Community Art Center in Fort Worth, TX. The Haunted Archive is an exhibition of post-photography, curated by me and featuring photographs, paintings, collages and installations by eight artists, based throughout the United States.

This exhibition explores the vernacular family photograph as a visual, emotional and social topos. END_OF_DOCUMENT_TOKEN_TO_BE_REPLACED

My first solo exhibition in Italy will open next week at Savignano sul Rubicone. It will be in conjunction with SI Fest Off, a festival of photography in its 26th edition, and is related to this year’s theme of the festival: Dialectic Strategies.

Hidden ID is a series of pinhole images that juxtapose public identity to interior privacy through using the metaphor of the archive as a substitution for the construction of the self. The images are based on a hybrid pinhole capture with in-camera photogram elements.  END_OF_DOCUMENT_TOKEN_TO_BE_REPLACED

Vernacular photography – often defined as “authorless”, but in reality, made by the same people who use it, for themselves or family/friends, or, alternatively,  commercial but made directly for consumers (e.g. the Sears portrait service) – has been gaining a lot of attention in the past few years or decades. If you are a photographer yourself, you know the writings of Geoffrey Batchen, who was the engine of the research of that type of photography with his books, especially Each Wild Idea. END_OF_DOCUMENT_TOKEN_TO_BE_REPLACED

Lonneke Engel for Versus, 1996, gracefully shot by Bruce Weber

Bruce Weber, a noted fashion photographer with a long and distinguished career, is having a retrospective exhibition at the Dallas Contemporary. It is fascinating for many reasons, but first of all because an exhibition venue known mainly for installations and projections has dedicated almost its entire gigantic space to a solo show of this kind of “traditional” photography. But also – and especially – because it offers an unusual view of fashion photography as it is.
END_OF_DOCUMENT_TOKEN_TO_BE_REPLACED

Can you guess who this is meant to suggest, just by looking at the picture? 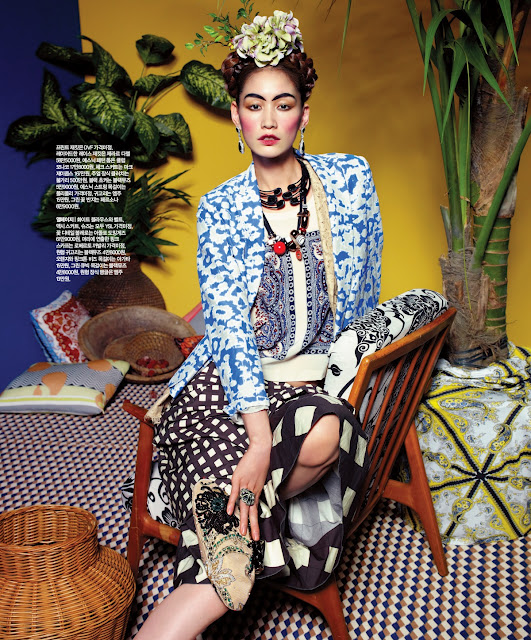 END_OF_DOCUMENT_TOKEN_TO_BE_REPLACED

Now that the semester is over, I  have to say it was really fun to teach both photography and Italian this year. Although formally the classes didn’t have anything in common, it was striking how much they were connected intellectually and as an experience.

For their final project, my students of Italian received the option to discuss a few classic photographs of Italy. As I was working on the assignment to decide what to include in it, so that they would learn both about Italian culture and art, I realized what a huge part of Italian photography is actually photos of Italy, in Italy, by non-Italians.

See this, for example:

END_OF_DOCUMENT_TOKEN_TO_BE_REPLACED

You already know this photo – it is the legendary portrait titled “Afghan Girl” that appeared on the cover of National Geographic in 1985 and then went on to become one of the most iconic pictures of all times. No wonder: the resolute gaze of the girl, in such dire circumstances, the unusual color of her eyes are indeed striking. What is also impactful but less  consciously recognizable is the color contrast of the saturated green and red that appeal subconsciously. And if you are a photography enthusiast, you also know the name of the photographer, Steve McCurry, popularly famous for shooting the last roll of Kodachrome ever produced, too. He was given that honor by Kodak because that film, noted for its exceptional saturated colors, was his signature film.  And you perhaps know that his signature style was striking human figures (most often shot in third-world countries) in traditional environments in saturated colors. END_OF_DOCUMENT_TOKEN_TO_BE_REPLACED

In the recent series of deaths of legendary figures, yesterday was the turn of Michel Tournier, one of the most interesting French writers and also a very influential, passionate lover of photography. To get an idea of how influential: he is the co-founder of Les Rencontres d’Arles, the famed photo festival in France.

Although he has published books with photographers’ bios and discussions of selected photographs, his most interesting writings are actually the novels and short stories in which photography is a subtle theme, a subject, plot driver and protagonist. I am fascinated with the ways the two arts intertwine.

Alec Soth at UTA, in the shadow of his presentation. On the screen: a note with the dreams of his subjects

Last night, UTArlington and Arlington Camera hosted a discussion of the noted documentary photographer (and Magnum member) Alec Soth with the curator who gave him the first big push of public recognition, Anne Tucker of the Museum of Fine Art, Houston. These public conversations are always useful. It’s true that most probably the information they reveal can be easily found elsewhere. But there are always revelations that happen only in a face-to-face setting.

That’s the reason I used this particular image as an illustration for my post: Alec in the shadow and, on the screen, a note scribbled with the personal dreams of the people he has photographed. It is an approach he uses to get closer to his subjects and allow them to show something of themselves and make it visible in the portrait.

END_OF_DOCUMENT_TOKEN_TO_BE_REPLACED

Well, it was a very eventful three months! Now that the semester is (almost) over and I am back up for air, here is what has been happening the meantime. END_OF_DOCUMENT_TOKEN_TO_BE_REPLACED

I had the distinct pleasure of teaching a group of awesome students this semester: sensitive, hard working and very much personally invested in photography. They made some great work and also allowed me to post some of their images.

If these images look familiar to you, you are not mistaken: this was their emulation assignment, in which they had to research an iconic photographer, analyze his or her style and produce images inspired by it. So that’s why you may recognize something you’ve seen. END_OF_DOCUMENT_TOKEN_TO_BE_REPLACED

If you are a photographer, you already know the importance of portfolio reviews for putting your work out there in front of curators, gallerists, publishers and other movers and shakers of the art world. You may have attended a few of them or at least may have read (scary) stories about them. Or you may have a great story of success to share yourself.

Well, mine is a bit different as I had the chance to sit along with a reviewer at the largest of them, FotoFest, and closely observe a full day of portfolio reviews with a wide range of photographers. And be the recipient of precious insider insights she shared with me. I can’t tell you her name as I don’t have her permission, but as this was a really invaluable opportunity to get to know a less known side of the art world, I thought it might be useful to write about the experience. What I saw was instructive, hopeful and overwhelming all at the same time.  END_OF_DOCUMENT_TOKEN_TO_BE_REPLACED

At a time when neither Leicas nor iPhones existed yet and photography was quite a serious affair involving assistants, coolies and fragile heavy equipment, you’d think photojournalism would be impossible. Yet it was in those early years when a Scottish photographer – John Thomson (1837-1921) – laid the foundations of photojournalism with the social documentary work he did in China in the 1860s. His photographs from those years can be now seen in their first exhibition ever at the Crow Collection of Asian Art in Dallas.

It is an exceptional exhibition on so many levels. Of course, the first appeal is the chance to see what China was really like in an era when cameras didn’t roam its lands – the great diversity of peoples, life and traditions, many of which are now extinct. And Thomson pointed his camera to street porters and high-rank officials, rejected ethnic minorities and respected monks alike.

The most compelling feature of his photography  though was his cultural sensitivity and his poignantly humanistic approach as an observer and a photographer at a time of which we are used to expect cultural paternalism and a focus on the exotic. While looking at a reality and people so different from his own, he saw not just types but their distinct personalities. When witnessing social phenomena dramatically different from what he knew, he didn’t point at their weirdness but found parallels with those at home. And he did it through photographic means. END_OF_DOCUMENT_TOKEN_TO_BE_REPLACED

Searching for Light
Create a free website or blog at WordPress.com.